Something you should understand is that we are preparing to renovate our kitchen. It’s been six years since the makeshift semi-renovation that I chronicled for The Atlantic, and the make shifts are no longer making it.

Everything we purchased from Ikea has collapsed into planned obsolescence. Meanwhile, the ancient cabinets, installed with devil-may-care insouciance and insufficient anchoring by the previous owner, have signaled that they are not long for this world. One of them signaled it with particular vigor by leaping off the wall and attempting to kill my husband during a windstorm.

Also, we have too much money, and too little marital strife. So yes, it’s time to renovate.

Preparing for a renovation is tedious for someone with my packrat instincts. We have about 97% too much equipment to neatly pack away, or indeed, fit in the new kitchen. And don’t get me started on all the meat I’ve got down in our basement freezer (the basement is getting a once-over too). Or the strange ingredients I’ve picked up over the years. What exactly was I planning to do with those sumac berries?

Well, the gadgetry will be stored somehow, the excess given away or sold. (Anyone want a sous vide water bath in good condition, cheap?) But of course you can’t take a frozen pork shoulder to Goodwill. So we’re trying to eat our way through the pantry. Which is how I found myself making slow cooker Char Siu.

Char Siu is that lovely Chinese barbecue–most people have had it, at least in the form of “barbecue spareribs” from your local Chinese restaurant. Making it in the slow cooker is not exactly the classic mode, and I can’t say that the results made me think I was on holiday in the far east. But you know, they were pretty dang tasty for “stuff I had in the freezer and fridge”. And it took next to no time, which is a nice bonus.

I made it with a combination of “country ribs” and pork shoulder, both of them undistinguished pieces of meat from the local Giant that I suspect I picked up on sale. I used perhaps 3 pounds of ribs, and the same again in pork shoulder. But as far as the meat goes, this is one of those “use what you have” recipes, provided it’s reasonably fatty–I suspect if you tried this with pork loin, you’d end up with a sort of jerky.

At any rate, I made up the following sauce.

I whisked it all together, threw sauce and meat into one of those giant ziploc bags and sort of shook and kneaded it a bit, then left it in the refrigerator overnight.

Now, I should note that I didn’t actually need to marinate it overnight. The recipe didn’t call for it. I had no reason to think that it would improve matters. For all I know, there are chefs all over the globe sniggering at me right now because I marinated my already-fake slow cooker char siu. But you see, I needed to put the pork in the slow cooker the following morning, when I would be busy, and not a 4 pm on Sunday afternoon, when I had time to futz around with defrosting my pork shoulder.

So I marinated the pork. And it came out nicely. You cook it on low for 5-6 hours, until it’s just tender. The relatively short timing does, unfortunately, make this an imperfect weekday dish for those of you who don’t work at home. But it’s just right for those Saturdays when there’s a lot to do around the house, and you can’t face the idea of starting on an elaborate meal after you’ve finished regrouting the bathroom.

Alternatively, if you use a really big piece of meat that’s all in one piece, unlike my modest little rib-and-shoulder combination, it will take longer. The answer is left as an exercise for the reader.

Anyway, the sauce takes less than five minutes to throw together. At the other end, you just lift the pork out and slice it (removing any bones that have slipped their meat casings), and serve. Or, if you want to be very fancy, you can throw it under the broiler for about five to seven minutes to crisp up the outside. This will give you time to defat the sauce a bit, throw it into a saucepan and make a gravy:

Put the liquid from the char siu into a saucepan over medium heat. Meanwhile, whisk the cornstarch into the red wine until all the lumps are dissolved. Add the wine/starch slurry to the liquid in the saucepan, whisking briskly, then cook it for a minute or two, still whisking, until it’s thickened into a nice, silky gravy. Serve with the sliced pork.

We ate quite a lot of that pork, gladly.

I know what you’re thinking. You’re thinking”Didn’t the title of this post mention something about a poached egg?”

My, what a fine memory you have! It did indeed, and that brings us to possibly the best thing about this pork, which is what you can do with the leftovers. Presuming you have some.

There are but two of us; we had some. And there I was, coming to the end of a long workday, husband out for supper and me and the dog starting to get a little grumbly in the stomachal area. It occurred to me that there was still some pork. But also, that that pork would be mighty fine with a poached egg or two and some chopped green onion.

Now, I sense that I may be about to lose some readers. Many people in this world regard poaching eggs as a sort of arcane art, known only to the chefs who produce hotel brunches. Others are horrified by anything with a runny yolk. To this I would make a few rejoinders:

And what is the secret, ask those of you who have a love-hate-fear relationship with poached eggs? Simple: don’t worry about what they look like.

The number one fear people have about poached eggs is that when you put them in the pan, they’ll send streamers everywhere, and look like they’re growing hair. And, well, guys. Do you have any idea what that thing is going to look like in your stomach?

The important thing is how it tastes going down. Just commit to making some ugly, yet beautiful inside (you) poached eggs. After you’ve made them a few times, you’ll get better at keeping them under control, so they’ll look a little neater. But they won’t taste any better, I promise.

First, you can crack them into a mesh strainer suspended over a bowl, like so:

Then slide them into a saucer and cook them as normal. This will take a lot of the loose white off, giving your eggs the clean contemporary styling so modish for the modern home.

Alternatively, you can use perforated poached egg cups. It’s important that they’re perforated, so that the water can get in underneath. Butter the cups well, crack an egg into each, and voila! Beautiful, mess free poached eggs, every time. (Do butter the cups well, because otherwise they’ll stick–nonstick coating or no–and become unlovely indeed when you go to get them out.)

But more about poached eggs anon. Because if you’re going to make what I had for supper, before you start messing around with egg poaching, you’ll need to reheat your pork. I followed a pretty simple method for this: I chopped some leftover pork loosely, stuck it in a dish, and dumped a glob of leftover sauce on top.

It looks … not like anything you’d want to eat. But I promise, though the magic of heat and time, it will become delicious. Just wrap it well in foil:

(The eagle-eyed will have noticed that I didn’t bother preheating. That’s right! I’m an outlaw! Er … well, okay, maybe I’m a middle aged lady who takes vitamins and at least thinks about going to Pilates on a semi-regular basis. The thing is, when you’re reheating something, it doesn’t really matter if you preheat. Baking or cooking are different matters).

All right, now that our pork is warming up, let’s attack the eggs. The important thing about poached eggs is that you never want your water to come to a rolling boil. You just want a few pretty bubbles at the sides, like so:

Now, if I were making these eggs for toast or Eggs Benedict, I’d throw about a teaspoon of salt into that water. But the char siu is already pretty salty, with all that soy sauce, so it’s not really necessary. Simply place your egg in a saucer, get it as close to the surface of the water as possible, and slide it in. 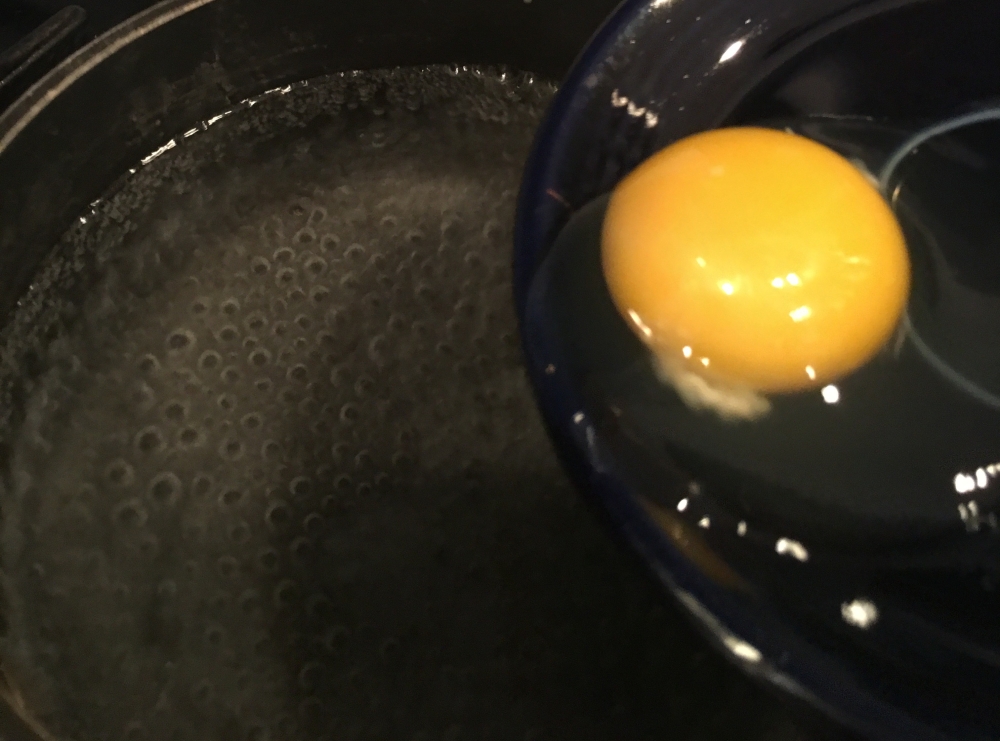 You really do want to get it close. If you drop it in from too high a height, you run the risk that the force with which it hits the water will separate yolk from white, leaving you with … a mess. But if that happens, I have good news for you: eggs are cheap! Don’t panic! Pull it out and make another.

Cook 3 minutes for a nice, runny yolk, more 4-5 if you want it harder. Longer than that, and you’re making a hard-boiled egg.

Try to start cooking them just as your pork is getting ready to come out of the oven. That way, while you’re cooking the eggs, you will just have time to take out the pork and pull off the foil. It should now look about like this:

Now just chop a couple of green onions into little disks to scatter over the surface. After three minutes, remove your poached eggs with a slotted spoon, deposit gently atop the pork, and dig into your divine, inauthentic dinner.